We are all given the same possibilities at birth and have the same potential for a good life. That's what we've been telling ourselves for ages. That's what we like to think. But the sad truth is that for every socio-economic difference and for every genetic deviation we eliminate, new ones appear. I was acutely aware of how large those differences still were the night I stood with my back hard against a gritty brick wall, a lady mugger holding a knife to my throat. 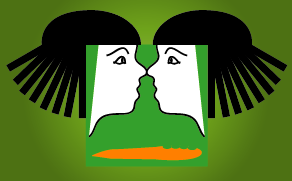 The hand wielding the knife was not unlike my own hand, the angry eyes staring at me gave me a feeling of looking at myself in the mirror. She had my face, my build, even the colour of our hair was the same, indicating some kind of weird shared taste for glossy silver stripes. In the old days they would have said we were twins. Still an ocean of differences remained. The knife at my throat let me know just how vast that ocean was.

"C'mon, gimme your odds!" spat my assailant, underlining the urgency of her command with a lightning quick flick of the knife. I felt a burning sensation, she had drawn blood. We all have odds. Officially they didn't exist. Officially we were all equals. Like hell. Still I tried bluffing, playing the equals card:

"Huh, whatcha mean, I ain't ..," using zip talk just like she did. It did me no good. She was fast. With a punch to my belly she had me doubling over, exposing the back of my head and neck. My wig fell off, dropping to the ground. My God, she's going for my IQ chip, easy to access at the back of my neck. Gasping for air, I was helpless. She had it now. Without an IQ chip I would die in about a week, without my own, I'd be someone else.

Obviously she didn't want me dead because I felt a new chip going in, her chip or a cheap spare. Thank heavens. Now I was her, she was me, except for our memories. Quickly I filled the stranger's chip from my short-time memory, restoring some sense of self.

"Wow, I like these odds!" I heard the knife woman exclaiming with surprised delight. Then she tapped my head with her knuckles. "I think you may have some more worth-while stuff in here." She was using free-speak now. I hadn't realised my free-speak was stored on my IQ chip. Now that she had my intelligence, I had expected the ongoing robbery to grind to a halt. It didn't. So she wasn't robbing me because she was stupid. She was just twisted. Now she was fumbling to get at my memory modules. There were dozens of them. They say memories are insulated on separate units to protect intellectual property rights. She had them now - but she couldn't slot mine without removing her own, a critical sequence. She could have waited for later, but she didn't. She hadn't loaded patience yet, I guess.

The police hadn't either. Just then they struck. Zap! Zap! Two flechettes hit the woman in the neck, side by side. She buckled, still clutching the knife. But all those memory units catapulted from her hand, bounced, rolled, scattered all around the sidewalk and pavement. Complete chaos.

Well, we did retrieve them all eventually. But you know, they all look much the same. So who could tell which ones were hers and which were mine? We'll never know now. Memories flow and mix with time. I reprogrammed a bit using short-term memory and stuff from the IQ chip. A lot of the stuff I had known was gone forever. I can't work as traffic flow capacitor anymore. On the other hand, I've got a brand new set of childhood memories that keep me awake nights. The woman that tried to rob me is serving five years, so her odds didn't improve, and she is having to learn patience the old-fashioned way. I go visit her in jail once in a while. We exchange memories, but it's slow going, she doesn't want hers back.

I do social work now. I tell people I started because of a mix-up. I find the job satisfying, but everyone is calling me a scatterbrain.

Tilbake til hovedsiden / Back to main page.